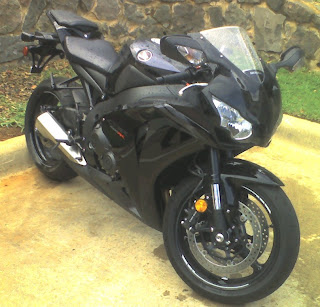 MOGO recovers stolen bike in minutes with the latest technology available (GPS). MOGO received a stolen bike report from the Dallas Police department as well as the client on July 30th @ 7:20am. Once our recovery team activated the GPS device on the bike we had the bike tracking within minutes. The CBR1000 was recovered with minimal damage and was tracked from Dallas to Grapevine. The Tarrant County Auto Theft Task Force and the Grapevine PD were steaking out the bike to see if the thief would return to the location were it was left. This is the typical protocol of a bike thief. When a bike is stolen most thieves take it to an open area where they can leave it and watch it from a distance to see if the police have some type of tracking system on it, if the police do not show up after a few hours the thief feels they have a unprotected bike and they move in to take it FOR GOOD. MOGO wants to thank the guys at Al Lamb's Dallas Honda for making sure thier clients are protected with MOGO. The latest in GPS theft and tracking technology.
Posted by MOGOMAN at 9:13 AM 1 comment: